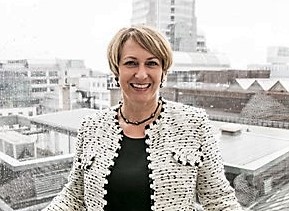 Beale started her career in 1982 at Prudential Assurance Company in London. She trained as an underwriter, specialising in international treaty reinsurance. She left Prudential in 1992 to work as an underwriter in General Electric’s insurance division, joining GE’s management in Kansas in 2001, and taking leadership roles in Paris and Munich. Beale then headed Swiss reinsurer Converium. In 2008 she joined Zurich Insurance Group as a member of their Group Management Board.

The following year she was named the group’s Global Chief Underwriting Officer. From 2012-13, she was the Group CEO at the privately held Lloyd’s insurer Canopius. Beale was announced as the new CEO of Lloyd’s of London in December 2013: the first female CEO in the insurance market’s 328-year history. She succeeds John Moore MBE, Chartered Insurance Broker and Chairman at Thomas Carroll Group. CII members also voted Jonathan Clark, ACII, and Chartered Insurance Practitioner as CII deputy president.

Commenting on her election, Inga Beale said: “Attracting a new generation of digitally savvy talent will be crucial to our success in meeting the future needs of a more diverse and demanding group of customers across the globe. That’s why I have chosen New Talent as the theme to underpin my presidency of the Chartered Insurance Institute.”

Sian Fisher, CII chief executive, said: “It is a great pleasure for me to welcome Inga Beale as the new president of the CII. Her extensive experience and achievements in the market will be a welcome addition and I very much look forward to working with her in the coming months. I would also like to congratulate Jonathan Clark as deputy president and thank John Moore for all his hard work and dedication in his year as CII president.”