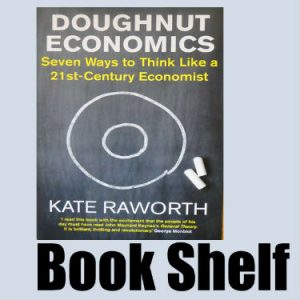 Because most of us have a very limited grasp of economics, and because we don’t want to appear ignorant, we tend to adopt the conventional doctrines. Swallowing them whole, and assuming that they are as sacrosanct as the laws of nature or mathematics. We find ourselves bandying about terms like market equilibrium, gross domestic product, and rational economic man in an effort to appear worldly wise and sophisticated. Politicians being some of the worst offenders: becoming instant economic ‘experts’ the moment they take office.

Now, along comes a book – Doughnut Economics, by Kate Raworth – that calls into question all of those old economic certainties: revisiting the theories that underpin the accepted dogma, and asking us to reframe our vision of the economy. Raworth, who is an Oxford academic with a background in international development, concludes that economics is broken, and its outdated theories have permitted a world of poverty juxtaposed by extreme wealth. Not only that, it is threatening to bring the world to the brink of ecological disaster through its insistence on continual growth.

Raworth identifies seven modes of thinking that, in her view, will transform the debased 20th century model, making it fit for the 21st. Along the way, she asks us to: revise our belief in mechanical equilibrium, realising that the economy is a far more complex circulatory system influenced by feedback loops; appreciate the domestic economy, and recognise the social underpinnings that are the foundation of an equitable society; identify the environmental restraints that should provide the ecological ceiling for our endeavours; and refocus business onto its social objectives.

For some, perhaps the most challenging leap will be the re-examination, and conceivable abandonment, of GDP as a meaningful measure of economic success, while recognising that continuous striving for growth is destructive. Likening the latter to cancer which inevitably destroys its living host. The time has also come to deny the ‘existence of rational economic man’, by accepting that self interest in not the sole driver of everyday human and economic activity.

Ambitious, radical, and meticulously argued, Doughnut Economics challenges the underpinnings of current dogma and will leave doctrinaire minds spinning. But, I would like to think that she has captured the zeitgeist of new wave economic thinking. 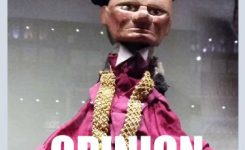